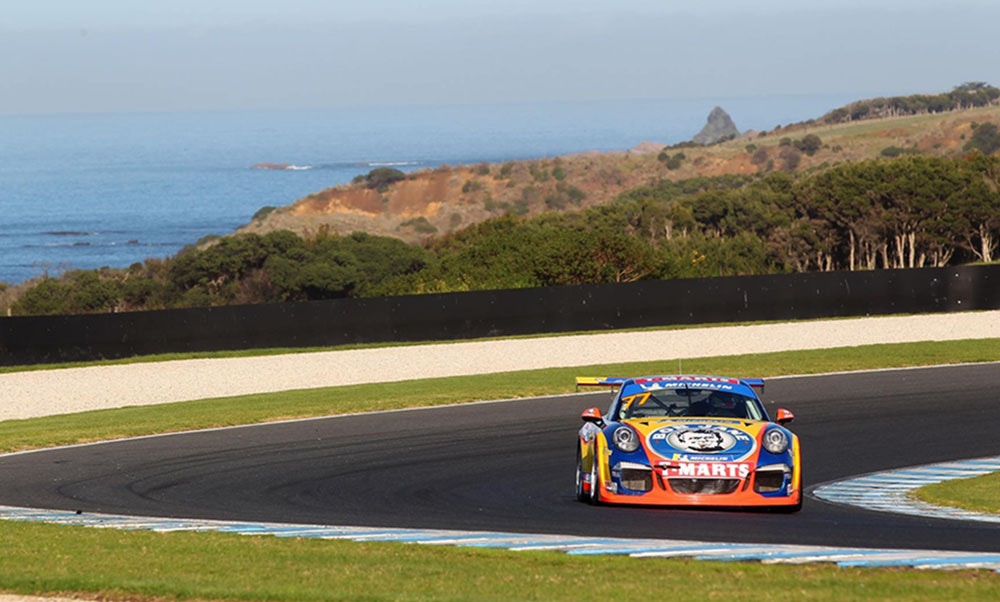 Adelaide teenager Max Vidau has demonstrated incredible race-craft yet again in the third round of the 2018 Porsche Michelin GT3 Cup season at Victoria’s Phillip Island Grand Prix Circuit across the weekend, gaining over 20 places over the course of two nine-lap races.

The South Australian former Formula Ford champion set the pace in the opening practice session of the event and qualified on the front row in second place, just eight-hundredths of a second off pole position.

In the first of three races for the event, Vidau held second place and was chasing the leader Cooper Murray when a lockup forced him off the road and into the wall, as a result of the wet grass at Phillip Island.

“I didn’t get the best start off the line but I kept pace with Cooper, though unfortunately I made a mistake at Turn 2 in locking the rear tyres and fell off the road,” said Vidau. “With the wet grass it was impossible to pull up before hitting the wall.”

The progressive grid format used by the Porsche Michelin GT3 Cup series left Vidau towards the rear of the field for the start of the nine-lap second race, though a storming drive through the field saw him claim ninth place despite another off at Turn 2.

“We were off 23rd on the grid for the second race but we worked our way through the field,” reflected Vidau. “Unfortunately, I made another mistake at Turn 2 but without getting stuck this time, though I overtook a lot of cars in that race and it was good to regain track position.”

Vidau’s charge continued in the third and final race of the weekend by moving up from ninth to second over just nine laps, challenging race leader Murray in the final stages of the race.

“I got a great start and rounded a few cars into Turn 1 and on the first lap,” explained Vidau. “We eventually made our way through second but couldn’t find a way through on Cooper for the win.

“We showed good pace in those races and what our team can achieve, finishing off the weekend with a positive, but it was a bit of a hit in the championship.”

Vidau is currently in third place in the 2018 Porsche Michelin GT3 Cup Challenge Australia championship standings, 119 points behind the leader.

This event marked the half way point of the 2018 Porsche Michelin GT3 Cup Challenge Australia calendar, with the next round being at Queensland Raceway in Ipswich from July 27 to 29.