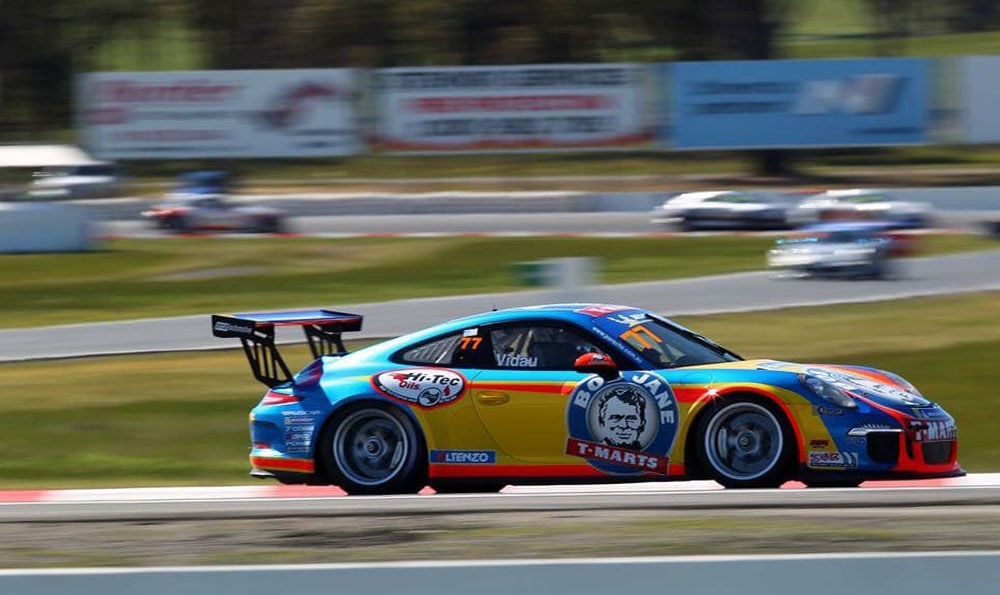 South Australian teenager Max Vidau recovered to third place in the final race of the penultimate round of the 2018 Porsche Michelin GT3 Cup season, held at Winton Motor Raceway in Victoria over the weekend, following a storming drive through the field.

Last year’s Australian Formula Ford champion produced a stunning fight-back in the first race of the event. Fighting for the lead, Vidau was the innocent victim of a collision following an early-race restart. The damage forced him into an unscheduled pit stop and relegated him down to 20th place, though he fought back to finish in fourth place in the 35 lap race.

“Unfortunately, we got hit at the rear at the restart, which punctured my tyre and sent us off the track, in turn damaging the front splitter,” said Vidau.

“The Sonic team did an awesome job to repair it and get me back out on the track without losing a lap. That allowed us to fight through the field from 20th to fourth, which was a lot of fun and wasn’t easy to do on such a tight track. I had to do some big moves at places where you wouldn’t ordinarily overtake people, but it was the only way to get through.”

Vidau held onto fourth place in the second race of the event, engaging in a race-long battle with Jimmy Vernon for third place and finishing just six-tenths of a second behind.

“It was a great battle with Vernon, but we just couldn’t find a way through on someone with equal pace and on such a tight circuit,” said Vidau.

Vidau prevailed over Vernon in the third and final race of the weekend, moving up to third place to complete his fightback drive with a podium placing.

“We continued the battle with Vernon into Race 3 and I got through at Turn 1 and was able to finish the move off at Turn 4,” said Vidau.

“We were able to pull away from him and were setting lap times that were comparable with the leaders, but they had already broken away up the road by that stage. “The weekend didn’t go to plan but we didn’t make a mistake, just a bit of bad luck early on,” he said.

Vidau is now placed third in the 2018 Porsche Michelin GT3 Cup championship standings with one event remaining in Sydney.

“Hopefully we can go out in Sydney on a high and end the season with some more race wins,” said Vidau.