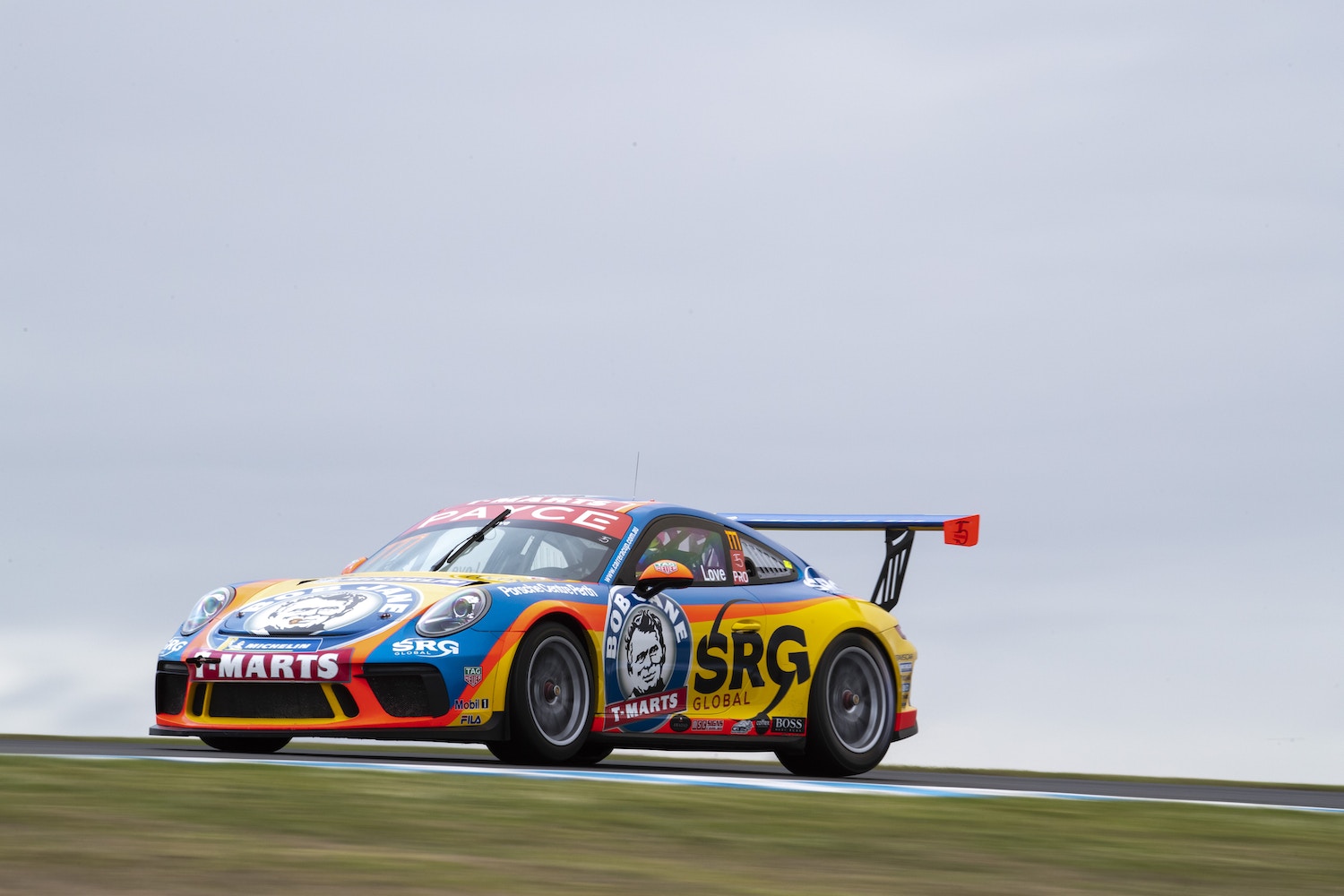 Bob Jane T-Marts Jordan Love has written himself into the record books with a clean sweep of pole position and all three race wins at the WD40 Phillip Island SuperSprint on the weekend. Teammate Michael Almond completed a dominating weekend for the Bob Jane T-Marts team with two, third place race finishes seeing him join his teammate on the podium.

Love’s perfect weekend commenced with a strong car in practice, the team were so confident they had a good read on the car they opted not to use a brand-new set of tyres during practice.

The #777 driver went on to secure his first ever pole position in the Porsche PAYCE Carrera Cup Championship with a time of 1:30.7789, three-tenths of a second faster than championship leader Dale Wood.

“It really was the perfect weekend,” Love explained. “The main focus for this event was qualifying as it is an area I have struggled in. It was awesome to finally get that off my shoulders.

Love made a great start to Race 1 to get out in front of Wood. He drove the perfect race to lead all 22 laps and set up another front row start for Race 2. Another fantastic start in Race 2 propelled the #777 Porsche 911 GT3 to the race lead and Love was never headed on his way to securing his second win of the weekend.

The Bob Jane T-Marts driver led Sunday’s 14-lap race from pole and built a strong lead across the early laps. He maintained his position despite a race restart and withheld pressure from Wood to take his fifth straight race victory and his second overall round win.

“A pole position and three race wins, it doesn’t get much better than that,” Love continued.

“I can’t thank the team enough. As soon as we rolled the car out of the truck on Friday it was absolutely mega.

“Championship wise, I am now up there within striking distance of Dale (Wood). Consistency is going to be key, this series will be won by whoever manages their poor rounds the best,” he added.

Ironically, the last driver to take a clean sweep of pole and three race wins in a Porsche at Phillip Island was David Reynolds for Bob Jane T-Marts in 2006.

Teammate Michael Almond also recorded a consistent weekend of solid results to claim third overall for the round.

The weekend didn’t start the best with contact on the out lap of Practice 1 resulting in bent steering in the #77 Porsche 911 GT3.

“We didn’t have the best opening practice session with contact on out lap bending the steering,” Almond explained.

Putting the incident behind him, Almond went on to qualify fifth and moved up through the order to finish fourth in Race 1.

He claimed another position in Race 2 and maintained third through the final race of the weekend to record his first podium finish since winning at The Bend in August last year.

“It was great to be back on the podium,” Almond said. “It has been a long time between drinks.

“We need to keep doing what we did on the weekend to try and climb up the championship order some more.

“There are eight weeks to the next round we have learned a lot since we last raced in Darwin. I think we will be going back with a much stronger car,” he added.

The next event for the Bob Jane T-Marts team will be the Darwin Triple Crown on June 14-16.