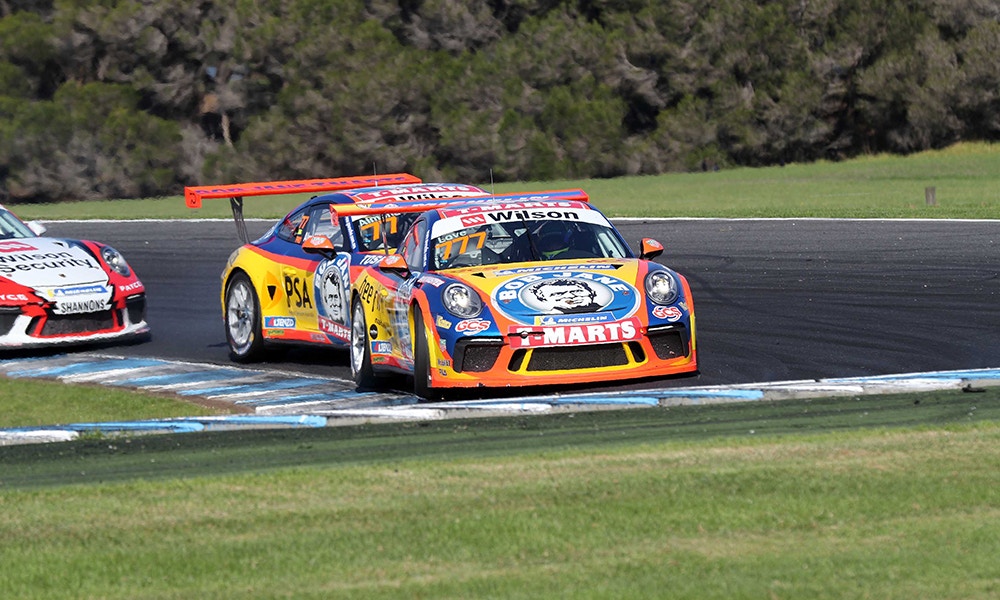 The Bob Jane T-Marts team endured a tough weekend at the third round of the Porsche Wilson Security Carrera Cup Championship at the WD-40 Phillip Island 500.

The event saw the introduction a new race format with drivers competing in a pair of 25-lap, 50-minute races – the longest single-driver races in the category’s history.

Michael Almond battled with food poisoning across the weekend but put in a gallant effort to finish the event sixth overall. Teammate Jordan Love ended the weekend 13th after a delaminating tyre forced him to the pits in the final 25-lap race.

In Friday’s practice sessions Almond struggled to find the right set-up and finished the sessions tenth and eighth. An issue with the #77 radio during qualifying left Almond out longer than planned on his first set of tyres. By the time he returned to the pits there was not enough time to run on his second set of tyres and he ended the session 10th.

The South Australian got a good start in the opening race and quickly worked his way up to sixth. He made a mistake coming into Honda under brakes and ran down the escape road, surrendering a position to his teammate before finishing seventh.

Despite being on a hydration drip on Sunday, Almond joined the grid for the final race of the weekend. He made a great start and had moved as high as fifth before a slight error allowed James Moffat to slip past. Almond finished the race and round sixth and said he enjoyed the longer race format.

“I struggled all weekend with food poisoning which was not ideal especially for these longer races,” Almond said.

“We learnt a lot over the course of the weekend and I definitely think I suit these longer races but this weekend also highlighted just how important it is to get qualifying right.

“I really had to dig deep for the final race and I was happy with my result especially as I was on a drip earlier in the day,” he added.

Jordan Love started the weekend well, setting the second fastest time in Friday’s final practice session. An error in qualifying saw him flat-spot a front tyre and end the session eighth. With each car only allowed to race on the two sets of tyres used in qualifying Love’s tyre bank was reduced.

The #777 driver made a good start to Race 1 and claimed two positions to finish sixth. In Race 2, due to the flat spot in qualifying, Love had to run a tyre from Race 1. Another good start in Race 2 saw him move to fifth before he locked up while defending his position which then caused the tyre to delaminate.

“It wasn’t the best weekend,” Love explained. “The flat spot in qualifying really set the scene for the rest of the event.

“The car felt good and I was confident coming into this event but sadly I didn’t manage to put it all together.

“Our focus is now on Darwin and trying to salvage a good result up there,” he added.

The next event for the Bob Jane T-Marts team is the Darwin Triple Crown on 15-17 June at Hidden Valley Raceway.