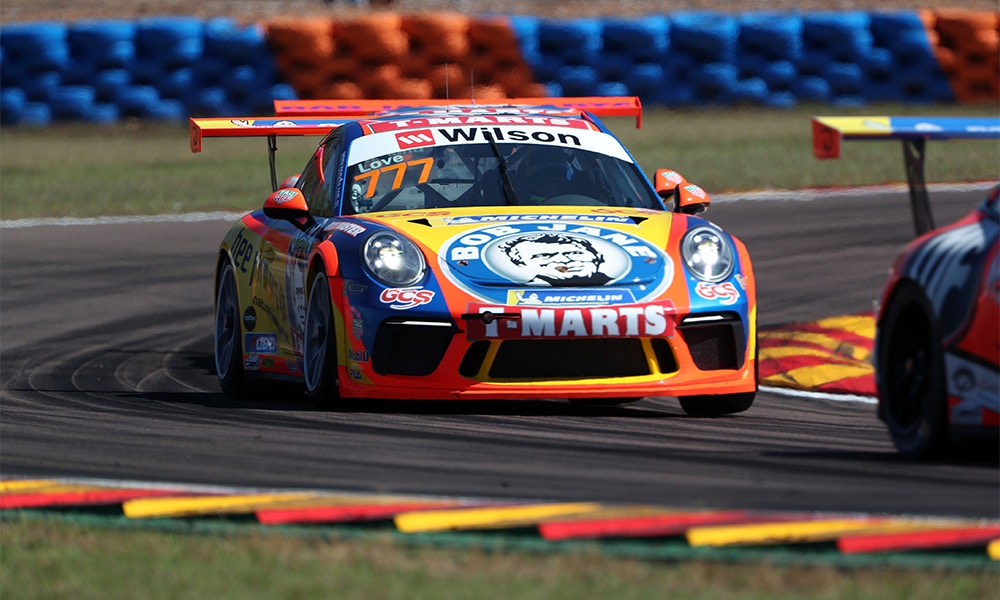 Bob Jane T-Marts Michael Almond narrowly missed a podium result at the fourth round of the Porsche Wilson Security Carrera Cup Championship at Darwin’s Hidden Valley Raceway on the weekend.

Almond, finished the round fourth overall while teammate Jordon Love finished his first ever event in the Top End ninth.

The team utilised Friday’s two practice sessions to work through changes. Almond finished the sessions fourth and sixth while Love progressed from twelfth in the first session to fifth in Practice 2.

The duo both struggled with car pace during qualifying ending the session eighth (Almond) and tenth (Love).

A mistake in the opening race saw Almond lock the brakes coming into Turn 1, run wide and drop down the order. He fought back over the closing laps of the race to finish tenth.

“As a team, we struggled with car pace throughout the weekend,” Almond explained.”

“In the opening race, I made a mistake which dropped me down the order and overall, probably cost me a podium result.

In the second race of the weekend, Almond made a great start, passing four cars off the line. Despite most of the race running under yellow flags due to incidents, Almond claimed another position on the final lap to finish fifth.

The #77 driver made good progress in the final race of the weekend finishing third to end the weekend fourth overall.

“In the final race my car was quite good,” Almond continued. “I got into a good rhythm early on and while the guys at the front were fighting really hard I watched and waited until they made a mistake to make my move.

In his first ever outing on the Hidden Valley circuit, Jordan Love made good progress throughout practice ending the second session inside the top five.

Love qualified tenth for the opening race and struggled to maintain pace with the front-runners ending Race 1 eighth.

He made a good start to Race 2 and progressed up the order to finish fourth.

“It was a bit of an average weekend, Love said. “I made good progress through practice but didn’t really put it together in qualifying.

“I struggled for pace in the opening race but managed to make up ground in Race 2.

“In the final race of the weekend, I locked a brake coming into Turn 1 and speared off down the escape road. I flip turned the car around to re-join the track and broke the drive shaft which put me out of the race,” he continued.

“Despite our results, I really enjoyed my first event in Darwin. I liked the track, it was totally different to what I thought it would be.”

The team will conduct two test days ahead of the fifth round of the series at Sydney Motorsport Park on August 3-4 where the Porsche Wilson Security Carrera Cup series will be joined by the Asia Carrera Cup series.