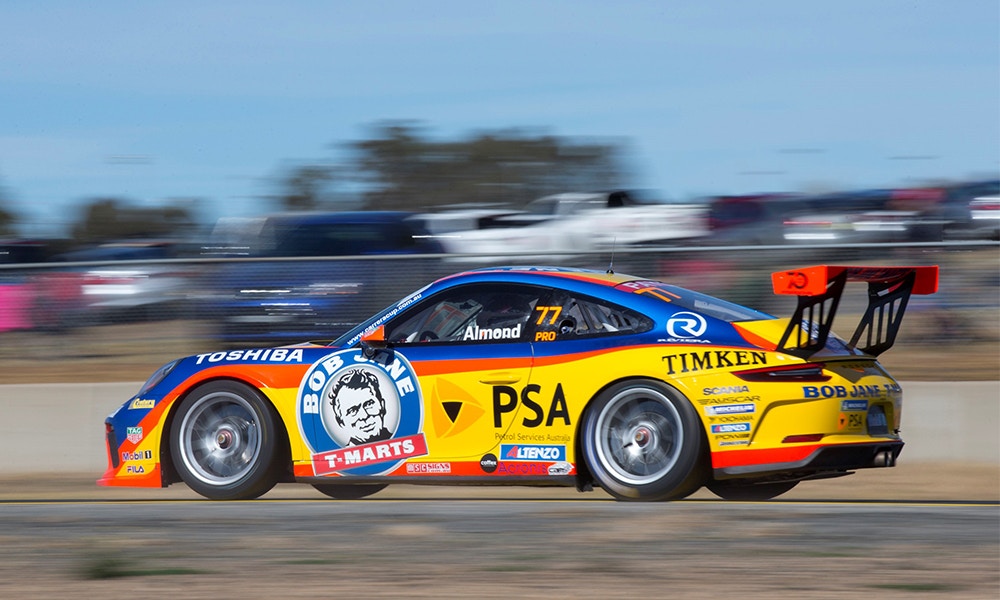 Bob Jane T-Marts Jordan Love secured his maiden Porsche Carrera Cup race win and claimed third overall at the fifth round of the series at Sydney Motorsport Park on the weekend. Teammate Michael Almond finished the round eighth and re-wrote the record books, setting a new track lap record of 1:30.5619.

Love struggled with pace throughout practice, sitting fifth and ninth in the two thirty-minute sessions. He qualified seventh for the opening race and worked with the team overnight to transform the #777 Porsche.

A good start in the opening race elevated Love up the order but a mistake on the second lap of the race cost him a couple of positions. He pushed hard throughout the closing laps to finish fourth, setting up a start from the second row of the grid for Race 2.

A great start to Race 2 allowed Love to move up into first with a bold move around the outside of Turn 1. While he pulled away on the opening laps of the race he eventually came under pressure from James Moffat and Race 1 winner Dylan O’Keeffe but held on to take his first Carrera Cup race win.

“It was a good weekend,” Love explained. “We struggled with pace in practice and qualifying, but managed to turn the car around for the two races.

“I made a mistake in Race 1 which cost me a couple of position but my start in Race 2 put me in a great position to take the race win.

The Sydney event also hosted the series third-ever joint round with Porsche Carrera Cup Asia. The two series contested two of their own races before combining to contest a joint Pro and Pro-Am race.

“The combined twilight race was a lot of fun I got a really good start and was sitting fifth but I made contact while trying to pass another competitor which saw me penalised. As my steering was a bit bent we played it safe and retired from the race," Love added.

Teammate Michael Almond showed great pace throughout practice but couldn't quite put a lap together in qualifying.

Starting from ninth on the grid he claimed a position on his way to finishing eighth but found it hard to make up ground on the fast flowing Sydney circuit.

"I was a bit disappointed with where I finished," Almond admitted. "We were fast all weekend but just not when it counted.

"I had good pace throughout practice but I just couldn't put the lap together in qualifying. To be honest I think I put too much pressure on myself to get the lap right.

"I was really happy with the lap record it shows we definitely had pace, it was just a shame I was so far back in the order," he added.

Almond finished the combined Pro race 8th and said he enjoyed the experience of racing under lights.

The sixth round of the series will be held at South Australia’s Tailem Bend Circuit on 24-26 August.