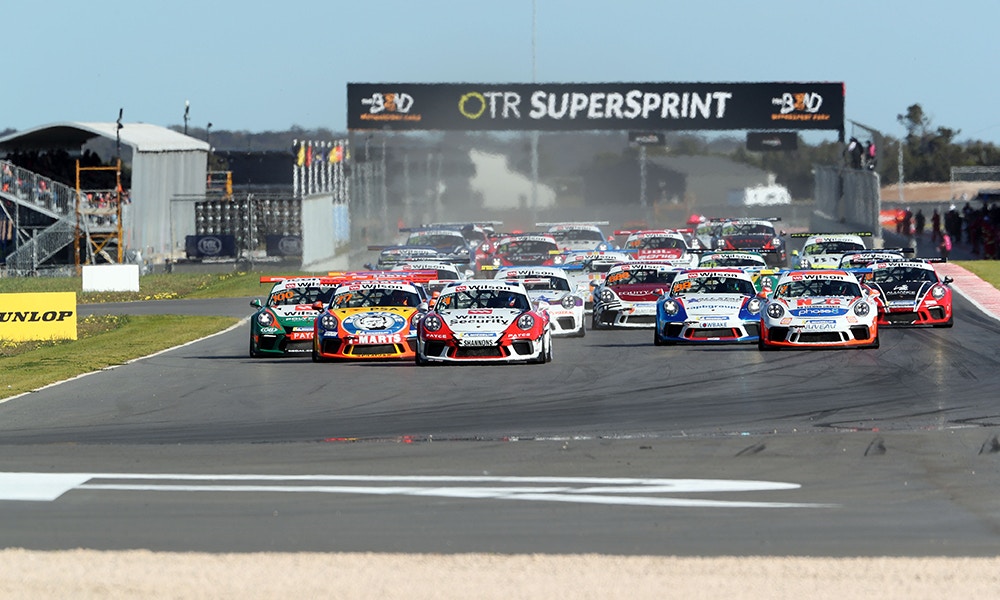 This event marked the first time Almond, who won Races 1 and 2 and finished third in Race 3, has claimed the top step of the dais in Carrera Cup.

Despite testing at the new South Australian Circuit earlier in the year, the team struggled to find the optimum set-up during Friday’s two practice sessions. Almond finished the first session ninth on the timesheets before a change of direction saw him shoot up the order to second quickest in Practice 2.

The South Australian driver qualified fourth for the opening race and made a good start, moving into second before the safety car was called. Once racing resumed, Almond battled Dale Wood and David Wall for the lead with Wall pulling away over the closing laps to take the race win.

Almond finished the race second but a post-race penalty to Wall handed Almond his second Carrera Cup race victory and set up a front row start for Race 2.

Almond got swamped off the start In Race 2 and dropped to fourth. He pushed hard and moved into the race lead on the opening lap and held his position to the chequered flag.

In the final race of the weekend, the #77 driver started from pole but didn't get the best start. Dropping to third, Almond conscious of claiming his first ever round win, maintained this position to ensure he came away with the overall victory.

“I’m absolutely excited to get the win so close to home,” Almond said. “It’s been a five-year wait until I have achieved a round win in Carrera Cup, so it’s taken long enough. I can’t ask much more than to do it in front of my family and friends.

“It’s a pretty surreal feeling to have such high calibre drivers in my rear view mirror. I feel like we had a good car and the Bob Jane T-Marts team did an amazing job. We had our struggles but we regrouped as a team and kept the car at the front all weekend.

“In the final race I didn’t get a great start and while I knew I had the pace nerves got to me a bit. I didn’t want to throw away my first round win on a silly mistake so I played it safe and sat in third,” he added.

Teammate Jordan Love endured similar setup struggles in practice sitting 12th in Practice 1 before making changes to the car which propelled him to third fastest in Practice 2. He qualified fifth for the opening race of the weekend but didn't have the set up right for the longer race, dropping back to eighth by the race end.

The team made some more adjustments to the #777 Porsche 911 GT3 ahead of Race 2 which proved fruitful, Love made good progress throughout the race, coming from eighth to fourth and setting the lap record of 1:52.0764 on Lap 3 of the race.

Love got another good start in Race 3 and held his position to finish the race fourth.

“Overall it was a great weekend for the team and I want to congratulate my teammate Michael (Almond) on his win,” Love said.

“We had some struggles in practice but the team worked tirelessly to overcome them and we got some great results. I made a good start Race 1 but just didn’t have the set up right for the longer race. Our pace started to fall off towards the end and I made a few mistakes, losing a couple of positions that I didn‘t need to lose.

“We made some changes ahead of Race 2 which worked well and I moved forward from eighth to fourth and set the race lap record for Carrera Cup.

“Overall I really enjoyed racing at The Bend Motorsport Park it is a really exciting fast flowing track and I look forward to racing there again,” Love added.

The Bob Jane T-Marts team will now prepare for the penultimate round of the 2018 Porsche Wilson Security Carrera Cup Championship at the Super Cheap Auto Bathurst 1000 on October 4-7.