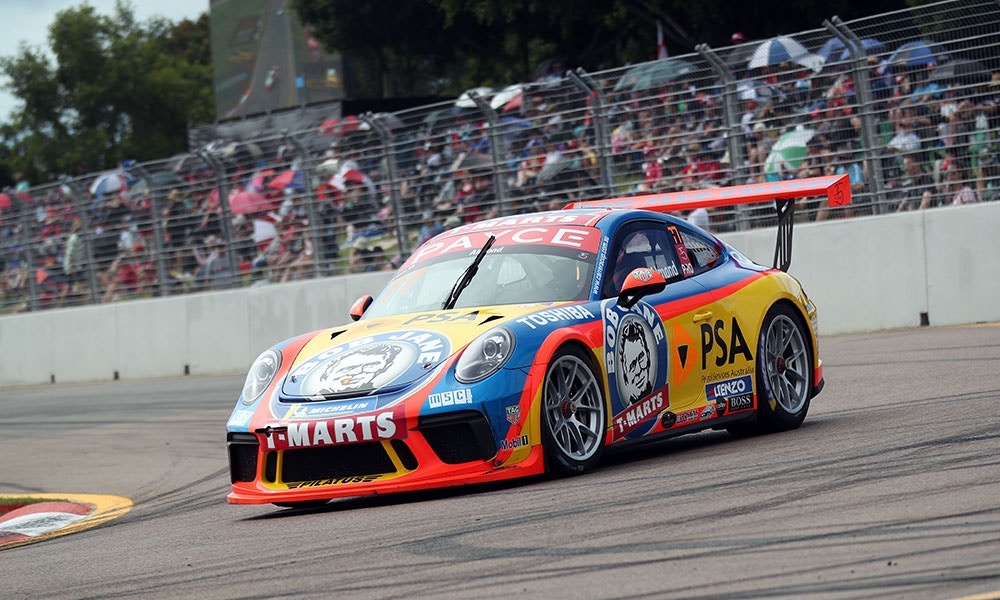 The Bob Jane T-Marts Porsche PAYCE Carrera Cup Australia team recorded strong results at the 2019 Watpac Townsville 400 on the weekend. Between them, drivers Michael Almond and Jordan Love claimed a top-three finish in all three races across the weekend.

Michael Almond finished the round fourth which elevated him to fourth in the championship standings while teammate Jordan Love finished a respectable sixth, an impressive feat considering he only had surgery on his wrist less than three weeks before after injuring it in Darwin.

Both drivers made a good start to the weekend with Almond sitting third in the first practice session and Love topping the timesheets in Practice 2. Qualifying didn’t quite go to plan with the duo caught out by traffic and track conditions. Almond faired the best setting the sixth-fastest time while Love qualified eighth for the opening race.

Almond made a great start to the opening 16-lap race moving into fifth off the start. He moved into fourth on Lap 6 and claimed another position on the ensuing lap to move into third. He maintained this position until the chequered flag setting up a start from the second row of the grid for Race 2.

In Sunday’s 28-lap encounter Almond made another good start, maintaining third and pressuring Warren Luff until he was able to make a move at mid-race distance. Once into second, the #77 driver held his position to the race end.

Despite getting another good start in Race 3 Almond was pushed out wide and dropped back to eighth on the opening lap of the race. He clawed back two positions but with the shorter race impacted by Safety Car periods; he was unable to improve on his sixth-place result.

“All-in-all it was a pretty good weekend,” Almond said. “I got good starts in all three races and finishing fourth has elevated me to fourth in the championship standings.

“Race 3 was a bit disappointing I got pushed out wide and lost a lot of positions. There were a lot of safety cars in that race which didn’t help, so I was only able to make up two positions.

“I am looking forward to the next event at Tailem Bend, I won the round there last year so I am hoping for another good result. We will have a test day in early August before Jordan and I fly out to train with top driver coach Rob Wilson in England,” he added.

Nursing his recently plated hand which was injured during an opening lap crash in Race 2 at Darwin’s Hidden Valley Raceway three weeks ago, teammate Jordan Love made steady progress across the three races.

After qualifying eighth for the opening Townsville race Love made a good start and had moved up into fifth position on Lap 6. While battling for position Love was turned around and dropped back through the order to 17th. He pushed on and reclaimed five positions to finish the race 12th.

The #777 driver had a better run in Race 2, passing six cars on his way to finishing sixth. Love made another good start in the final race of the weekend and moved into third on the opening lap of the race, he held this position to finish third and sixth overall for the round.

“We have had two really tough rounds but there were still a lot of positives to come out of Townsville,” Love explained.

“I made more passes than any other driver over the weekend and salvaged some really good points despite the opening race result.

“My hand held up pretty well considering it was less than three weeks since the operation. I did what I could to make sure I managed the situation and while it was sore at times it wasn’t unmanageable.

“All our focus is now on Tailem Bend, I am looking forward to our test day in early August and heading to England for some driver coaching before the next event,” Love concluded.

Love and Almond now sit third and fourth respectively in the Porsche PAYCE Carrera Cup Australia outright standings. The duo will test before heading to England for driver coaching ahead of the sixth round of the series at South Australia’s Tailem Bend on August 23-25.