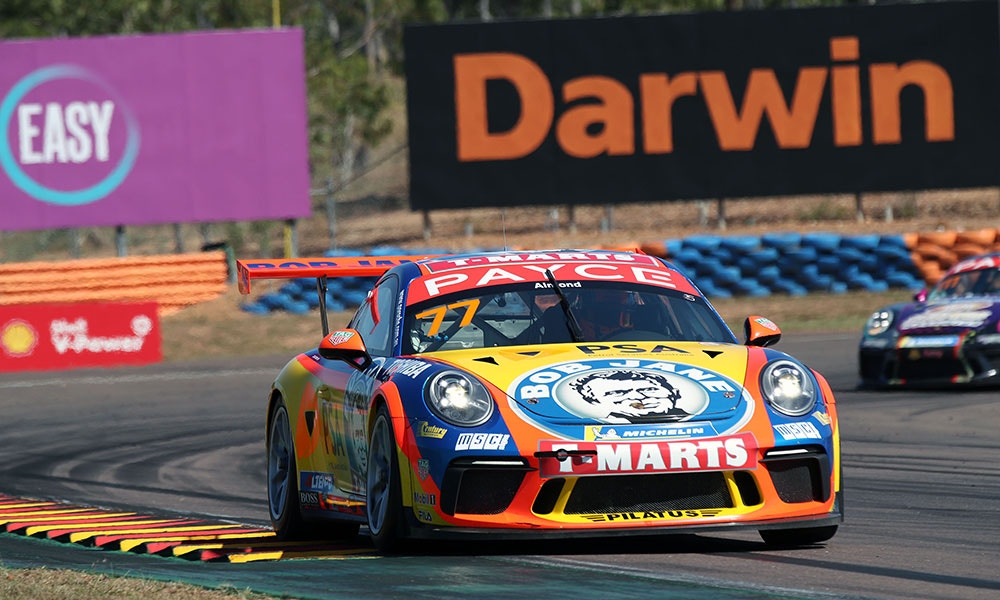 The Bob Jane T-Marts Porsche Carrera Cup team has taken consecutive round wins with Michael Almond claiming the top step of the podium at the BetEasy Darwin Triple Crown.

Almond finished second in two of the three races, before winning the final race of the weekend to claim his second, round victory in the Porsche Carrera Cup category. Teammate and Round 3 winner Jordan Love endured a horror run of events, set off by a questionable five second time penalty applied after the completion of Race 1.

Almond showed good pace in Friday's practice sessions which he finished second and third fastest. He went on to set the second fastest time in qualifying and secure a start from the front row of the grid.

"I got a great start in Race 1 and led for most of the race,” Almond said. “Unfortunately, I didn't keep enough heat in the tyres during the safety car period and ran wide after the restart, dropping me back to second.

The #77 driver maintained second position throughout Race 2 ensuring another front row start for the final race of the weekend.

"After running wide in the second race I was better prepared for the safety car in Race 3.This time I kept my tyre temperature up and was able to get passed Dale (Wood) and take the win.

"It felt good to be back on the podium, hopefully, this is the turning point for me after a few rounds of bad luck," he added.

The weekend didn't go to plan for teammate Jordon Love. The #777 driver sat second in the timesheets following practice but an error in qualifying saw him start Race 1 from ninth on the grid.

Love moved up the order and was sitting fourth as the race approached the final lap. On the final lap of the race, the Bob Jane driver put a passing move on Wood up the inside of Turn 1, rubbing wheels but staying on the racing line. Following the race, officials deemed the manoeuvre to be outside the rules and applied a five-second penalty to his finishing time.

After starting Race 2 from 11th on the grid Love became the innocent victim of an opening lap crash which put a premature end to his weekend and left him with a broken hand requiring surgery.

“It was a tough weekend and disappointing end to what could have been another good result,” Love said. “The Race 1 penalty set off a chain of events and it is a hard one to accept, especially when you look at similar passing moves from other events that did not result in a penalty."

“I had surgery on my hand yesterday to plate the break so the focus is now on being ready to race in Townsville in three weeks’ time.

“The car sustained a lot of damage, unfortunately the team now has a huge job ahead of them to get the car ready in a short timeframe,” he added.

Despite not contesting the final round of the weekend Love did finish the round 11th but drops from second to third in the championship standings.

The next round of the 2019 Porsche PAYCE Carrera Cup Australia Championship will be held at the Townsville 500 on 5-7 July.