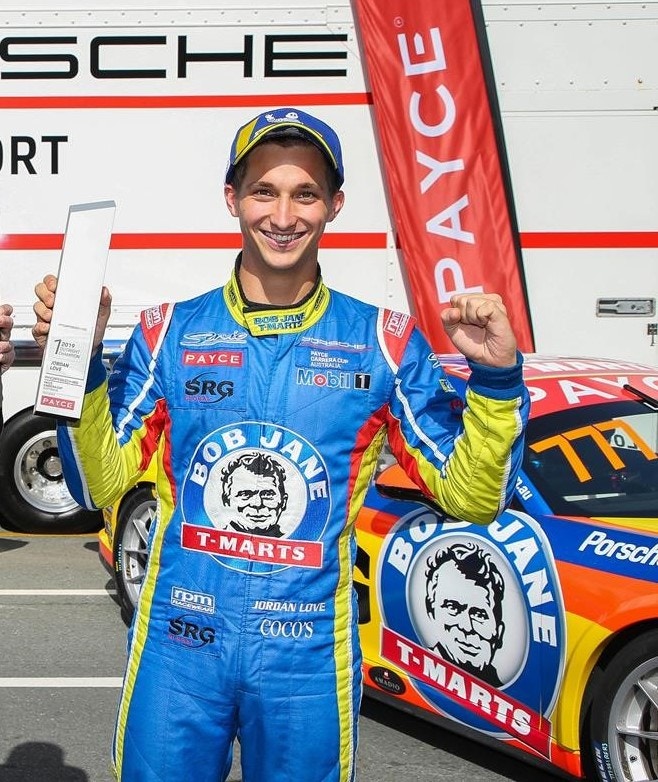 Bob Jane T-Marts Jordon Love has completed the comeback story of the year, claiming the 2019 Porsche Payce Carrera Cup title by the shortest margin in the series history.

Love, who is also the youngest driver to be crowned champion, endured a tough journey to the title. The 20-year-old sustained a broken hand as a result of a racing incident in Race 3 in Darwin. He returned to the driver's seat just three weeks later in Townsville and finished the event trailing Dale Wood by more than 200 points.

Over the next two events Love meticulously eroded the deficit, sweeping all six race wins to enter the final round at the Vodafone Gold Coast 600 three points ahead of Wood in the championship standings.

“It’s been an awesome journey and I can’t put into words how this feels right now,” Love said.

“After Darwin, it was a case of head down, keep pushing and to come back from that is incredible.

“We’ve had some mega ups and some pretty low lows; it’s been one hell of a journey,” he continued.

Love topped the timesheets in both of Friday's practice sessions before ending qualifying second fastest. He made a good start to the opening race, settling in an eventually finishing second.

The championship battle erupted in Race 2 when Love the two rivals made contact. Love spun and dropped to the rear of the field. He went on to finish the race eighth position and behind in the standings while Wood finished third. A post-race hearing handed Wood a 15-second penalty placing him seventh on corrected results.

The pair started side-by-side for the final race of the year, Love finishing fifth and Wood seventh – following a post-race penalty for short-cutting the turn one chicane.

"This was the toughest track to have to finish the year on," Love continued.

"This weekend was much like the year I have had it threw everything at me. I just had to keep going, keep looking forward and try to do the best job I could.

"Having the championship decided by a hearing and penalty wasn't the way I wanted to seal it but at a track like the Gold Coast with everything on the line incidents are inevitable," Love continued.

The young champion will now prepare for the Porsche Junior Shootout in November in France.

Teammate Michael Almond ended the round and the season seventh overall. The #77 driver made steady progress through Friday's sessions sitting seventh and third in practice before qualifying eighth for Race 1.

Almond made a good start to Race 1 and gained two positions on his way to finishing sixth. He made another good start in Race 2 avoiding the opening lap melee and gaining another position to finish the race fifth.

In the final race of the weekend, Almond came together with Duvashen Padayachee and was forced back to the pits and out of the race due to damage.

"That was not the way I wanted to end the year," Almond said. "The car had pace and I was making up ground in each race.

"Once again I got caught out with qualifying, it is so important to get that right especially on a circuit like the Gold Coast.”

The team will take a well-earned break before preparations begin for the 2020 Porsche Carrera Cup Championship.