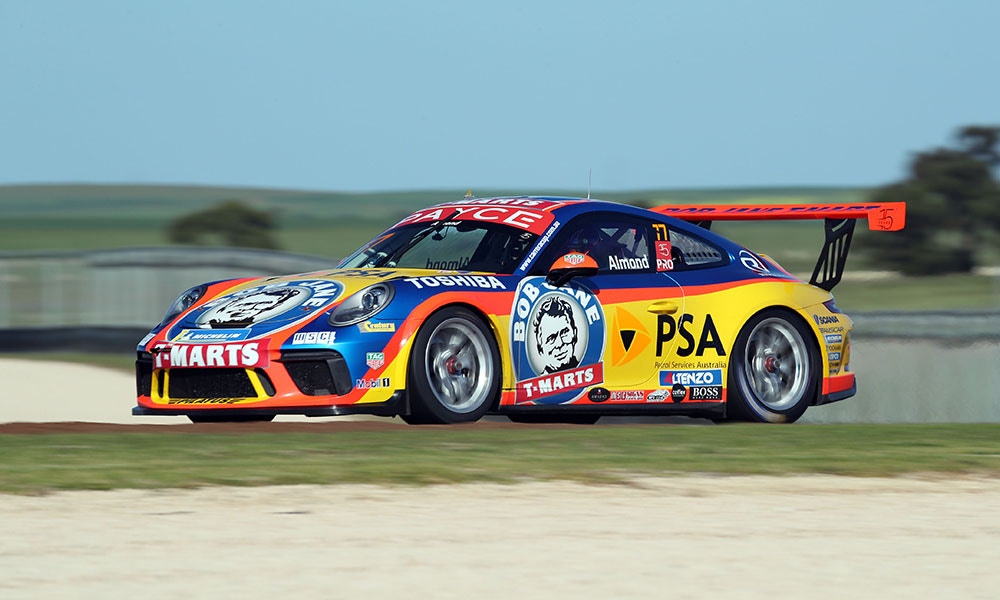 Bob Jane T-Marts Jordan Love has swept Round 6 of the Porsche PAYCE Carrera Cup Australia Series at Tailem Bend, qualifying on pole, winning all three races as well as setting both a new qualifying and race lap record.

Teammate Michael Almond battled jet lag and endured a tough weekend, a seemingly minor touch forcing a DNF in the second race. The South Australian managed to salvage a top ten round result with a courageous charge from last on the grid to finish the final race eight.

After fine-tuning the car throughout Fridays’ two practice session Love secured pole for Race 1 with a qualifying lap record of 1.50.8122.

The #777 driver navigated his way around the opening lap mayhem to take control of Race 1. He set a new race lap record of 1.51.7984 of Lap 6 before taking the race win, six seconds ahead of Cameron Hill.

Love led Races 2 and 3 from start to finish and re-set his own lap record on the final lap of the final race.

“It was an awesome weekend,” Love explained. “To come away with pole and three wins as well as the lap record was amazing.

“The car was fast straight out of the truck which meant we really just had to fine-tune it across the weekend. It makes it a lot easier when the car is right and you are not having to chase set-up over the weekend.

“I’m hugely excited to wrap up the Michelin Junior drivers title – it’s been one of the goals since we started in GT3 Cup Challenge two years ago. Having that locked away means I can just focus on the two rounds remaining in the championship,” he added.

This was Love’s second clean sweep of the season and he has closed the gap to sit second, 90 points behind championship leader Dale Wood with two rounds remaining.

After returning from the UK just days before the event, teammate Michael Almond struggled with jet lag across the weekend. The #77 driver, who won the event in 2018 qualified 11th for the opening race.

Almond made a good start to Race 1 but was forced to run off track to avoid an incident on the opening lap. Dropping to dead last, Almond worked his way back through the order to 11th by the race end.

In the second race of the weekend, Almond made another good start and quickly moved up into seventh. Despite taking evasive action to avoid a potential incident light contact was made with Liam Talbot which displaced the radiator hose on the #77 Porsche forcing Almond back to the pits and out of the race.

Almond started the final race from the rear of the grid and showed great pace as he climbed 15 positions to finish eighth.

“It was a tough weekend,” Almond explained. “I raced well, but really let myself down with qualifying I just couldn’t put it together.

“I am disappointed as it has had a big impact on my points. My focus now is on the final two rounds and finishing the year as best as possible."

The penultimate round of the 2019 Porsche PAYCE Carrera Cup Australia championship will see the series head to Mount Panorama for the Supercheap Auto Bathurst 1000 on October 10-13 2019.