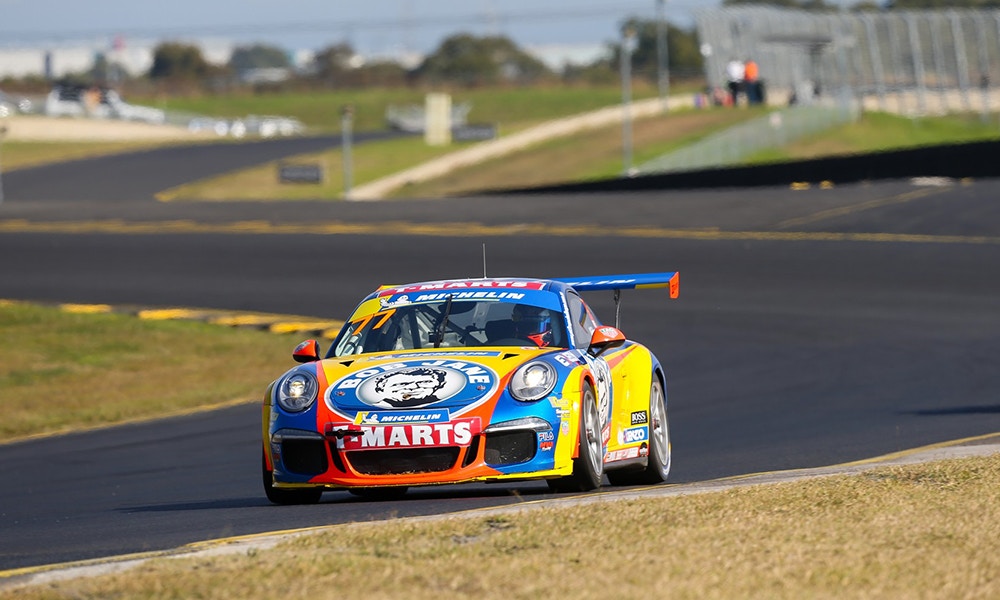 Perfect Start to Round Turns Into Recovery

With a perfect start on Friday at Sydney Motorsport Park for round 2, topping the practice time sheets by 0.1786 sec in the hour long session with multiple tyre and setup changes in the morning. Max then qualified on pole by 0.3946 seconds by the end of the session. Max banked the fastest time early in the session on his first set of qually tyres 1.30.386 seconds only to set an even quicker time 1.30.2281 seconds on the second set late in the shortened session. “It was great to set the quickest time on both tyre sets in such a short qually session, the team did an amazing job in the tyre change to get me out for my final flying lap” Vidau said.

Race 1, Saturday morning could not have gone better for the Bob Jane T Mart Sonic driver launching his Porsche off the line into turn 1 to take the lead, converting his pole to a win with a 2.39 sec margin back to second place. “I had a solid start off the line and tried to push early to get a gap back to 2nd then I settled into a rhythm to maintain the gap.” Said Vidau

Race 2 was over seconds after it began as the Bob Jane T Mart car attempted to launch, a failed clutch seeing him stranded on the line as the 24 car field stormed by. The car was towed to pitlane under safety car where the Sonic team worked frantically to try and return Max to the race.

Starting Race 3 from P23 on the grid, Max made an impressive start to push through the traffic to be in P10 at the end of the first lap of 25. Unfortunately removing his front splitter overtaking in turn 1.

“After losing my splitter I had to drive completely different to work with massive understeer, it was ok I was still making ground on the lead pack for about 15 laps then the front tyres started to really hurt and I had to back off just to finish” said Max.

Vidau was running as high as fifth place mid race only to ultimately slip back to 8th by the finish.

The next round of the championship will the series visit the iconic Phillip Island Grand Prix circuit on June 7-9.