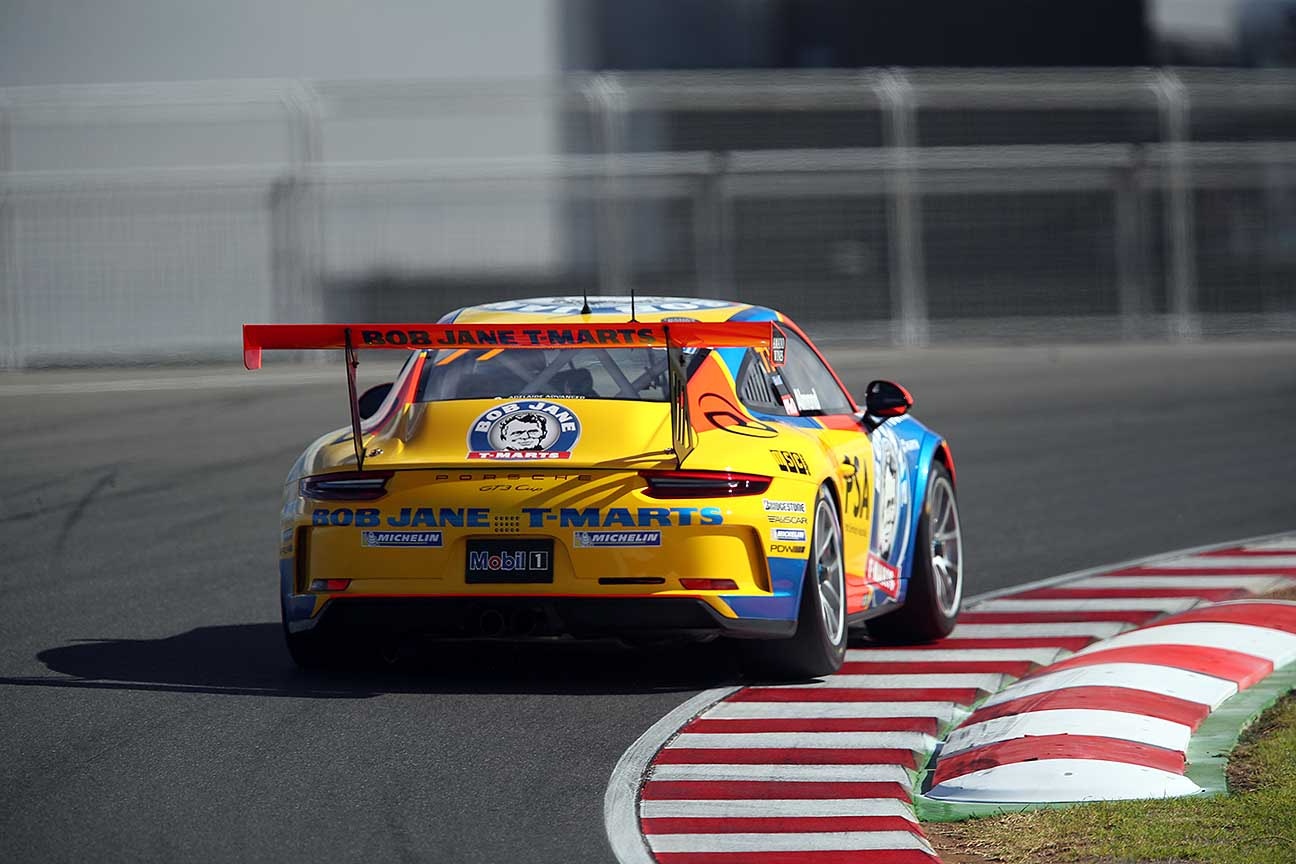 Bob Jane T-Marts Porsche drivers Michael Almond and Simon Fallon have salvaged a strong haul of points in a wild weekend of Carrera Cup racing at The Bend Motorsport Park in South Australia this weekend.

Almond proved that his Round 1 pace at Sandown was not a one-off, qualifying fifth and confident that there was even more pace in his Sonic Motor Racing Services-prepared Porsche.

That speed all came undone within a few hundred metres of the wet first race when the South Australian was involved in a three-way squeeze heading down the main straight that saw his car loop around in front of the big pack of Porsches.

Thankfully, his #77 entry survived with relatively minimal damage, but the team elected to park his car.

In the longer 20 lap Race 2, Almond climbed his way from the back of the field up to 13th, and again improved three more spots in the final race, finishing a solid 10th amongst the competitive field.

He said that the spin in front of the pack on Saturday was a “hairy ride”.

“It was a very wet start, it was a standing start and by the time we were in fourth gear, we found ourselves backwards on the straight,” he said.

“That was a hairy ride, a 720 degree rotation in front of the pack, but we kept it away from the wall but got damage to the front left so we had a DNF.

“The boys worked really hard overnight to fix the car, and we had a bit of a tune up after Race 2 this morning and Race 3 was amazing.

“The incident in Race 1 was a shame, but we salvaged points and we’ll move onto the next round.”

For Carrera Cup rookie Fallon, the young gun continued to chip away at his speed and race craft as the weekend progressed.

Fallon’s weekend highlight came in Race 2 when he stormed from 10th to fifth before the first corner, but ultimately slipped back down the order.

He says that he is confident that his outright pace has improved and is already looking forward to the next event.

“It was a mixed weekend for us, up and down, but we made a lot of progress and a lot of learning so that’s the biggest thing for me right now, just constantly getting quicker and adapting,” said Fallon.

“The coolest part of the weekend would have to be that race start in Race 2 from 10th to fifth, I’d love to do that again. Got a few areas to work on for the next one and I’m sure we’ll chip away at it and be right for the next round.”

The next round of the Porsche Carrera Cup Australia event will be held at the Townsville street track in July.